WWPD Interview with John-Paul from Battlefront

Well the boys over at the What Would Patton Do podcast score a big one with a great interview with John-Paul of Battlefront, makers of Flames of War. The boys must have had his family tied up at some undisclosed location because they got him to spill the beans on just about everything! You won’t want to miss the interview for yourself but here are the highlights of what John-Paul mentions (forward the show to 51:00 to get right to it) :

John-Paul gives some nice details on their efforts in plastic production where he mentions:

This entry was posted in 15mm, Flames of War, News and Updates, Podcasts, Vietnam, WW2.

The Gents over at the Three Moves Ahead podcast deliver an excellent review of Wargame: European Escalation in their latest Episode 160. We haven’t played the game yet ourselves but they give it overall high marks and make a great case for giving the game a try. The trailer video for the game certainly looks nice as do the screen shots. The game is certainly not lacking in eye candy.

A horrible name perhaps but Wargame: European Escalation provides a unique take on the RTS genre by mixing in Cold War-era history with a solid RTS game. Not a simulation by any means, the game still manages to provide that wargame feel in an RTS package. A combat-based point scoring system combined with territory capturing and supply gives the game a unique enough mix to warrant a look.

The game is available on Steam. Also see the developer’s game site.

This entry was posted in Computer Wargames, Modern, News and Updates, Podcasts, Reviews.

The Napoleon Bonaparte Podcast, also known as Napoleon 101, is a great audio series on Napoleon and the Napoleonic era. The show is now basically complete, having started in 2006, but the content is essentially timeless. The series consists of about 58 episodes that average 60-90 minutes apiece. So altogether there is well over 80 hours of material. The show features historian and educator J. David Markham, President of the International Napoleonic Society and Cameron Reilly, CEO of The Podcast Network. Mr Markham has written a number of books on Napoleon, including Napoleon for Dummies, and does a great job delivering the life and times of Napoleon.

You can certainly jump into any particular episode that interests you but we very much enjoyed starting from episode #1 and going straight through. If you do not start with the early episodes be aware that the show is obviously pro-Napoleon but the hosts will generally admit when they are being biased and also indicate topics that are often in dispute. In later shows they even have a number of guests that disagree with some of their own interpretations. The goal of the show is to spark your own interest in Napoleon and the period to lead you to further study of your own.

Overall the podcast is extremely well done. Audio quality is generally very good although some shows have some minor issues. Also there is often a sound level difference between the two hosts that can be a minor annoyance.

As with any show there are various complaints found throughout the show comments. One common complaint is about the off topic chit chat. This does appear in most episodes, especially later ones, but is mostly kept to a minimum and usually just in the beginning of each episode. After all, the podcast is not an academic lecture but simply a show — Some banter among the hosts should be expected. Another frequent complaint is over the occasional political shots at the Bush administration (the show was mostly recorded from 2006-2009). Again, these are very infrequent and minor. You will need to be extremely thin skinned for these to detract from your enjoyment of the show. We found the occasional comparisons of Napoleonic events with the Iraq/Afghanistan Wars interesting.

Overall, as newcomers to the Napoleonic era, we found the series incredibly valuable and entertaining. Combined with the recent bounty of Napoleonic games and miniature rules it has spurred us on to further reading and research into the period. Frankly we are shocked at ourselves for having ignored such a fascinating period of history all these years. If you think you have any interest in Napoleon or military history you should give at least the first few episodes of this show a listen.

This entry was posted in Military History, Napoleonic Warfare, News and Updates, Podcasts.

The folks over at Beasts of War have been going crazy over Spartan Games’ Dystopian Wars this week. They have put together an excellent collection of posts and videos about all things Dystopian Wars. Of particular note are the videos that cover the world of DW as well as how to play DW (part 1 and part 2). They do make a few minor errors with some of the rules but nothing of real significance or that you wouuldn’t catch after your own reading of the rules. But if you have any interest in Dystopian Wars this is a must see collection.

This entry was posted in Dystopian Wars, Naval Warfare, News and Updates, Podcasts.

The gents over at the WWPD Podcast now have an excellent compilation of their n00b zone segments. They compiled over an hour of segments from seven shows and Steve adds in some nice new additional commentary and clarifications between segments. The noob zone covers tricky rules issues and basic tactics that newcomers and even veterans to FoW often get wrong. Name aside, this compilation is valuable to the new Flames of War player and veteran alike. The issues covered come directly from the experience of the WWPD crew playing lots of other FoW gamers in competitive games. For only $2.50 this is the best FoW value you can get. Recommended.

And now you can have twice the fun with the new n00b zone compilation 2.

This entry was posted in 15mm, Flames of War, News and Updates, Podcasts, WW2. 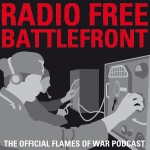 Battlefront released what I believe is their first ever Flames of War podcast, Radio Free Battlefront. It is a one hour show with Mike and Wayne of Battlefront. They discuss the new D-Day books and give a nice battle report covering the La Fière Causeway mission along with a discussion of their forces. Overall a nice job and hopefully we will see more of these in the future.

Don’t miss the Villers-Bocage and Monty’s Meatgrinder scenarios. And of course if you want more Flames of War podcast goodness check out the What Would Patton Do podcast.

This entry was posted in Flames of War, News and Updates, Podcasts, WW2.

Well as Steven himself would say, he’s ‘spilled the beans’ about our recent contribution to the WWPD: News from the Front podcast.

Good wargaming podcasts are hard to come by. Either the content is not very good or the sound quality makes you want to stick an ice pick through your brain. In either case, inevitably, they end up dying off after a few shows anyway. Steven and crew have already provided hours of entertainment and useful insight and with a little luck they will also be around awhile. They have solid content and even manage to provide excellent sound quality during group discussions — one of the more challenging areas for many podcasts. As someone who has a long commute, quality podcasts have become as good as gold and we were happy to do what little we could to help. If you would like to help out as well you can always buy a t-shirt and proceeds will go towards the show.

This entry was posted in News and Updates, Podcasts.

Russ from The D6 Generation podcast posted their first Lost Chapters episode. The one hour show covers their first Deathwatch game and is available for $1.00 via either Ambling Books or Payloadz. Unfortunately neither option provides a simple one-click purchase and download but we tried it via Payloadz and as long as you already have a PayPal account it is pretty straightforward. They also have a special Wives Attack segment and Battlestar Galactica Review available for purchase.

Note, if you decide to purchase via Ambling Books you are essentially getting a version that can only be played via that application/service. With Payloadz you get a straight .mp3 file that you can play on anything.

The whole Lost Chapters idea is a way for the D6 Generation to generate a little bit of income, provide more content and could perhaps lead them to do a few things they might not otherwise do. After all, they only have so much time and spending it on something they get nothing in return for beyond praise can only be sustained for so long. If you enjoy the D6 Generation be sure to grab a few Lost Chapters or throw them some support in another form. These guys really do a great job.

This entry was posted in Board Wargames, Miniature Wargames, News and Updates, Podcasts.

Jason White, of the board wargaming podcast Point 2 Point, made a New Year’s resolution to produce a show every month in 2011. To achieve this he may need to do a lot of the shows without his co-host Scott. Episode 43 is his first effort of the year and he does a great job. We’ll ignore his digs on Conflict of Heroes and chalk it up to stress! They are currently having trouble with their main site so Jason is posting on the ConsimWorld blogs.

Jason flies solo for this new episode of P2P. He talks about a number of games including: Hellenes, Hearts and Minds, Command and Colors Ancients, Combat Commander Pacific, and Asia Engulfed, among others. He also gives his current top ten list and his hot ten list. He introduces some new segments, including a pre-order of the month. This month he focuses on GMT’s first design in the Fighting Formations series, a game focused on the Grossdeutschland Division. After the credits, you are welcome to stay tuned for an “Extra Point,” a non-gaming segment that will appear from time to time after the credits.

This entry was posted in Board Wargames, News and Updates, Podcasts, WW2.

We updated our Top Picks. We made a number of changes to replace what had become dead games. We also added a podcast section for the first time.

Gaming related podcasts have become a great way to stay in touch with the hobby and provide an especially good resource for miniature gamers to have some hobby related content to listen to while modeling. We have always listed podcasts in our links section but we thought we’d highlight the best of the best.

Our first two inaugural choices were easy picks. Both are outstanding podcasts that provide excellent coverage of their selected topics and solid entertainment value. We hope you give them a listen.

This entry was posted in News and Updates, Podcasts.