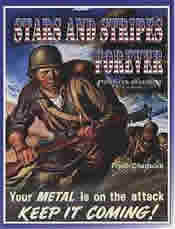 The folks over at Test of Battle Games have released a new expansion for their WW2 miniature rules Test of Battle (aka Command Decision 4). Stars and Stripes Forever covers U.S. forces in the Mediterranean and European theaters from the Torch landings until the fall of Germany. SaSF is a 52 page, soft cover, black and white book. Unlike a lot of game expansion products that feature new rules and units and other game items, SaSF has a very focused purpose. It simply provides the historical TO&E (Tables of Organization and Equipment) for all U.S. forces. This includes great details such as a listing of all infantry and armor divisions and where they served along with detailed ToB-formatted force organizations. Also included are great notes on doctrine as well as a full equipment table with all game information. It also does have one page of additional rules for U.S. reconnaissance troops, armored infantry, and artillery battalion FDCs. Moreover, the book is sprinkled with historical posters from the period often seen on the home front such as “Buy War Bonds” and “Your metal is their might”.

While Stars and Stripes Forever is intended for use with Test of Battle it is an excellent resource for any company/battalion level game and is also a great reference for anyone interested in the U.S. Army during World War Two. Recommended.

This entry was posted in Miniature Wargames, Reviews, WW2.

Reply
Test of Battle: Operation Market-Garden — Review « The View from the Turret said:
16Aug09 at 1016

[…] can be easily adapted for almost any WW2 battalion level system. Unlike earlier expansions, such as Stars and Stripes Forever, Market-Garden is a campaign book not an army book and includes a short, seven page, introduction […]