We don’t usually cover first person shooter computer games on the site but we were impressed enough with the trailer for Call of Duty: Advanced Warfare to make note of it. What caught our attention wasn’t whether it may or may not be a good game but simply the amount of future tech the game seems to highlight. If you are a sci-fi fan there is a lot to be seen even in just the trailer. Also see the short trailer.

Most obvious is the exo-skeletons but as you watch the trailer all kinds of interesting things appear. The troops have advanced communications gear, jump packs, climbing gloves, grenades that seem to home in on their targets and air burst as well as grenades with various target marking and obscuration capabilities. There is at least one heavier powered armor troop as well. There are some high tech vehicles including dropships, different types of VTOL aircraft, hover bikes, heavy walkers and advanced tanks. Oh, and lots of drones. 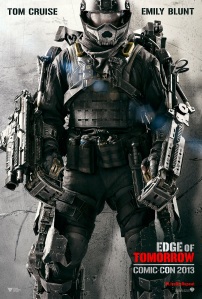 Even if the game turns out to be disappointing it should be fun watching some gameplay videos just for the environment. It will be interesting to see what else shows up in the game.

And speaking of exo-skeletons, we were pleasantly surprised by Edge of Tomorrow. Not a bad film at all and it also has some interesting future tech and scary aliens.

From a tabletop gaming perspective there are of course plenty of games with these themes. But certainly the most directly applicable is the new 28mm Anvil Industry Afterlife line that addresses the exo-skeleton idea directly. Their recent Kickstarter will be bringing even more goodies to the line. The Anvil line is all resin and is exquisitely cast. They even have their own new set of rules that should be worth a look.

This entry was posted in 28mm, Sci-Fi, Skirmish.