We actually do get some painting done on occasion. Back in Now THAT’S a Tank! we looked at the Khurasan 15mm Advanced Superheavy Grav Tank. In some of the pictures for comparison were the Khurasan Mid-Tech Humans in Power Armor troops. Well we finally got around to getting the troops painted. The tank is almost done.

The bases we used are custom Litko 3mm plywood bases. For 15mm sci-fi we take the approach that in the future troop unit sizes are smaller and forces more nimble. So having smaller bases with fewer troops makes sense. Individual figures at 15mm seem a bit too fiddly so this approach strikes a good balance. Moreover the bases can be used at skirmish to represent the 1-3 troops on the base or at larger scales could be a fire team, squad or even an entire platoon.

For higher tech forces we go with 1″ x 1 1/4″ for command and some support units (this is the ‘small’ Flames of War base size) and troops and other support units we put on 1″ x 1 1/2″ bases. For horde type troops we put them on 2″ x 1 1/4″ bases (Flames of War ‘medium’ bases). For powered armor troops we go with two troops per base (unless they are very large) and two on command bases. For more mid-tech armor troops we go with three or even four figures per base. Hordes are three or more per base depending on the size of the figure. We have found this basing system works well across a number of rule systems including Gruntz, Strike Legion, Quadrant 13 and Hammer’s Slammers.

The paint job we did is Imperial Fist inspired. The figures have enough detail that they paint up easily and details are easy to pick out without being overwhelming. While Khurasan calls them ‘mid-tech’ troops they fit the traditional power armor mold very well and have just enough bulk to be larger than ‘normal’ troops without being overly large. We think they mix well with other lines. The basing scheme is supposed to be sort of a Mars-ish barren effect. We may add something to them later because they are perhaps a bit too stark but work fine for now. 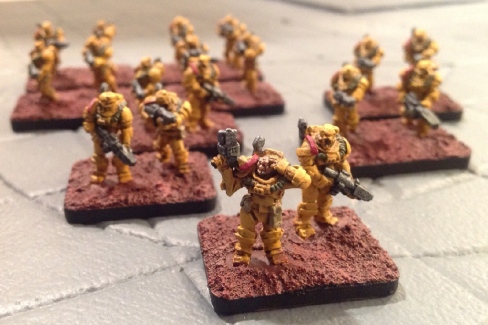 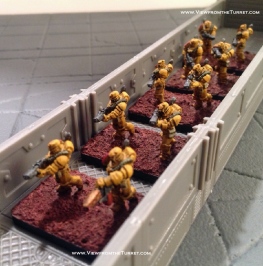 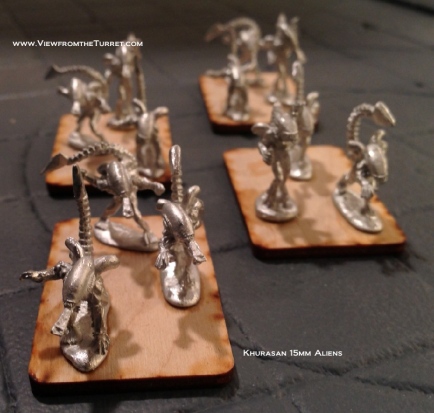 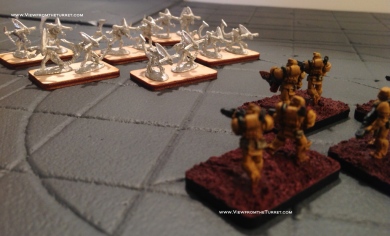 As you can see in the photos our basing sizes also work well with the Spaceship-X tiles for corridor battles. You can also see something new we tried. For the Khurasan Aliens we wanted that ‘horde stream’ feeling and so based the Aliens on the base the long way. This gives the units some depth. The hammerhead Aliens are a bit smaller than the regular Aliens so we left them on our normal bases to represent that they would fill a more scouting/infiltrating role and are perhaps harder to hit but weaker units.

This entry was posted in 15mm, Miniature Wargames, Painting, Sci-Fi.